I’d seen brief videos here & there of Wilt when he was at Kansas, but never as much as what was posted a few days ago on YouTube. Quite simply, the above video is awesome. The film quality can get dicey, but Wilt’s play is so extraordinary it doesn’t matter that at times he devolves into a fuzzy blob – during those moments his blob still jumps higher and moves faster than the other blobs. I don’t think I would have considered him to be a member of the same species as me if I had seen him play in person at the time.

Although it’s surprising that Kansas lost to North Carolina in triple-overtime of the NCAA championship game in 1957, what always struck me as more surprising is how Kansas didn’t even make the tournament the following season. A combination of K-State fielding one of its best teams ever (both KU and KSU were at the top of the top 10 most of the year) when only the conference champion was invited to the tournament, Wilt being out several games with an injury and opponents triple-teaming & beating Wilt up when they weren’t playing keep away all culminated in a “disappointing” final season at KU for Wilt.

It’s unfortunate that Wilt believed his time at Kansas would be jeered instead of celebrated long after he retired from the NBA and was Universally Hailed And Known As One Of The Greatest Ever, and maybe his disappointment fed & contributed to the few shortcomings his critics charged his career with. Whatever all the reasons were for Wilt’s (formally) staying away from Lawrence, all was righted (on my birthday) in 1998 when he attended the KU-KSU game to have his jersey finally, and rightly, retired. 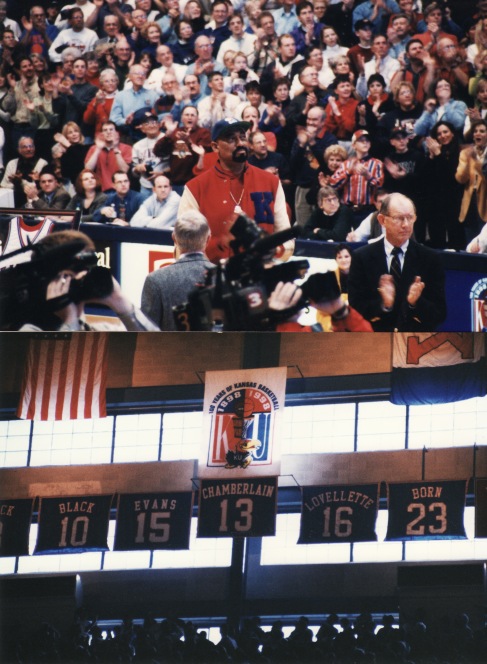 KU BALLS is looking forward to repeated viewings of the above clip starring Wilt Chamberlain, and is proud to include a 1957 team-signed program, a Wilt-signed basketball card, and a Kansas media guide from 1957-1958 season in its collection.