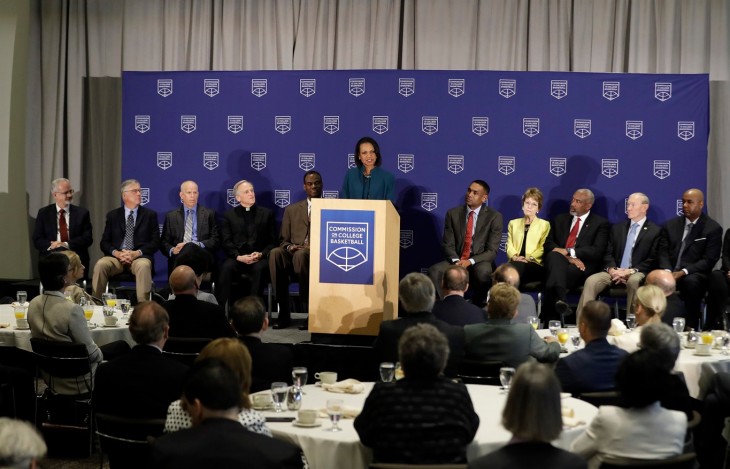 So the Commission on College Basketball released its recommendations on Wednesday and to say that their findings fell short of expectations – let alone being able to address the present concerns facing the sport – is a bit of an understatement. You may have already guessed this given the post’s title.

The commission itself, although comprised of some big names and respectable titles, seems a tad bit sanctimonious given the people that are on it – it would have been nice if an active coach or two and a “student-athlete” representative would have been included. And let’s also take a moment to address NCAA President Mark Emmert’s lauding of chair Condoleezza Rice, such as when he said this at the Final Four: “I mean just to be blunt about it, you don’t waste Condoleezza Rice’s time if you’re not serious about it.” Rice is an accomplished and respected person, but let’s not pretend that every decision she was involved with has been Solomon-esque – she may have played a key role in not responding to warnings preceding the 9/11 attacks, after all.

Obviously though, the real problem with the commission lies with its findings. By their own admission in the report, the commission was tasked with “being bold” and implementing “radical changes” – neither of these things occurred. To be fair, neither boldness or radical changes were an option once the commission made clear that the concept of amateurism or somehow compensating players were not going to be included in the report. As a result, once you remove those aspects from discussion of the problem, you’re primarily left with – for all practical purposes – the NCAA doubling down on the current approach.

I didn’t watch the press conference, but after reading the report it seems that it should have been done with a laugh track. From the opening and overly dramatic lines of, “In brief, it is the overwhelming assessment of the Commission that the state of men’s college basketball is deeply troubled. The levels of corruption and deception are now at a point that they threaten the very survival of the college game as we know it.”, to the heavy emphasis on the value of a college degree, to its presenting the NCAA as a puritanical force for good that is under siege, it was quite clear that the recommendations were going to focus on whatever strong-arm tactics that would help delay the inevitable collapse of the amateur model so that the NCAA’s current revenue stream would be protected.

Now maybe this wasn’t the intention of the commission and perhaps my take is an extremely cynical one, but once you read the report through that perspective, it’s quite clear. A perfect example of the commission blaming others, trying to take the moral high-ground, and intimidation can be found with its assessment of the one-and-done rule. I offer some polite and reserved golf claps for the commission asking the NBA to help change/remove the one-and-done rule. But I think they missed the mark by overplaying how significant of a problem this is with causing the current situation. By their own admission, it’s actually a small number of people that are drafted each year after only playing for their freshmen season. Then the commission mentions how if the NBA and the NBA Players Association don’t change this rule, they will consider eliminating freshmen eligibility. I mean…this was truly a baffling and ridiculous idea and outside of trying to punish the NBA and the athletes by not giving them a “free” way to assess talent, I’m not sure what this accomplishes. The NBA, greedy agents, greedy players & their families, shoe companies – all are to blame for the NCAA’s current crisis. But not, of course, the NCAA itself.

There are multiple, other areas where the commission seems to be tasked with enforcing the 1957 NCAA rule book, but my biggest issue is the hypocritical stance it has on money. The commission’s report goes to great length detailing the benefits and value of a college education, but its stance and morality play fall flat when it blatantly fails to address the other side of that coin – the value that the athletes bring to their schools.

This is a business model where every major stakeholder – the NCAA, schools, coaches, agents, and shoe companies – benefits via millions of dollars…except one. The athletes themselves. The report comes across as self-righteous, a seemingly, “How dare you ask for anything more” attitude towards the athletes while conveniently ignoring the billion+ dollars the NCAA receives for their efforts. I’m not saying I have an answer, but it is clear that until all participants truly have a stake in the situation, there will continue to be under-the-table deals, rule-breaking, confusion, and frustration.

WHAT THIS MEANS FOR KANSAS BASKETBALL…

“Okay,” you say – “got it, the commission missed the mark. But the current system has helped in some way build and support a program I love, so I’m not too worried about radical solutions as long as things stay fair relative to the rules we have at the moment. What does all this mean for my Jayhawks?”

Until then, Rock Chalk!