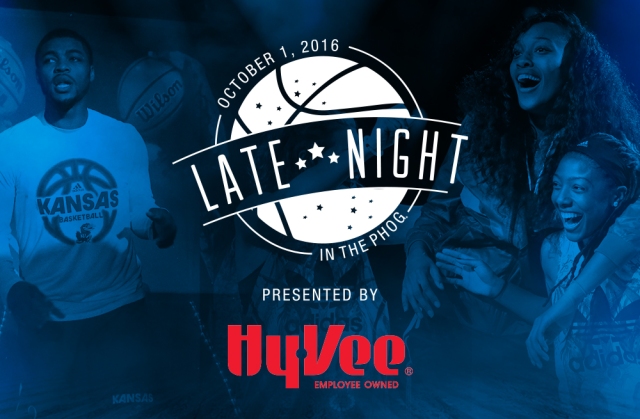 Okay, once again the title is a bit (*lot*) misleading – trying to predict what 17-18 year olds are going to do based on the number of commitments from Late Nights past is an exercise in futility (at least for my capabilities). But, as Late Night in the Phog is the preeminent recruiting event for the University of Kansas, I thought it would be interesting to take an updated look at how effective of a tool it has been for Coach Self with regards to signing recruits – especially with the large number that should be attending tomorrow night’s festivities.

Because it’s typical for an attendee list to change up until the evening starts, I won’t be including any of the 2016 Late Night in the Phog’s recruits/numbers in any of the below factoids. For Late Nights between 2003 and 2015:

Because so many recruits are expected for tomorrow’s Late Night, I thought I’d take a look at whether hosting a big group (i.e. double-digit number of attendees) is more or less effective in garnering commitments.

So, what does all that mean for this year’s Late Night, with 15 recruits currently expected to attend, including two of them who will be experiencing their second ones (Bol Bol and Troy Brown)? If you go by the above numbers & trend line, it’s not a promising indicator of success for Coach Self. As noted earlier, trying to predict what’s inside a teenager’s head is hard to quantify, but it is also interesting that KU is not considered the leading school for any of the five, Top 50 seniors (subscription required) that will attend tomorrow night.

That having been said, Coach Self’s success rate for signing kids who attend Late Night currently is around 30% (excluding the TBDs still outstanding from the last couple of years) and other than last year (again, there are still two TBDs), we usually end up getting a couple of commitments. If we end up missing out again however, it might be worthwhile to look at whether having a large number of recruits attend Late Night is counterproductive (perhaps they don’t get enough personal attention or they feel like they’re having to compete with too many other recruits) or if the Late Night format needs to changes. I know, I know – Late Night is a season kickoff and fan celebration event, but that doesn’t mean we can’t look at mixing it up. For example, maybe high school recruits don’t find the talent show-style skits and dancing quite as entertaining or compelling as we do, and that can be tweaked a bit.

Regardless of the number of commitments we get from recruits who attend Late Night, it obviously isn’t the only shot we get to sign top-shelf talent and nor is it even a comprehensive & effective way to evaluate the process. We’ve signed two #1 ranked high school players the past few years without either of them attending Late Night, and obviously Coach Self is a proven master at recruiting.