I love a great many things about college basketball – the tradition, the intensity of the rivalries, watching players develop and grow, the bond between the fans and the school, the “democratic” (or should it be chaotic?) nature of its determining a champion, and many others. I also love the weeks just before Midnight Madness/Late Night and the start of the season – not because of the anticipation of What Is To Come, but for the college basketball preview magazines.

I remember getting my very first Street & Smith magazine, the preview for the 1979-1980 season. The reason I got it? Darnell Valentine was on the cover. I don’t remember much about the magazine other than the cover, but I’m sure I didn’t read much outside of the KU write-up and the captions of whatever pictures there were. A few years later, Danny Manning’s sister got me Danny’s signature on the 1985-1986 Street & Smith issue, and once I discovered The Bible (the Blue Ribbon Yearbook) shortly after that, I was committed to buying any and all college basketball preview magazines in the future.

As my wife can attest to, it’s safe to assume that if you come by KUBALLS early in the college basketball season you will see several preview magazines scattered about. There are various websites you can visit/subscribe to that also have extensive coverage, but I like the simple feeling of a magazine in my hands. Sports Illustrated and ESPN The Magazine have decent coverage, but I prefer the depth of the special issues with 150-200 pages of All Things College Basketball. Athlon, Lindy’s and Sporting News are the annual regulars (though Sporting News didn’t have a release last year), with USA Today being a relative newbie.

Probably about 80% of what’s in these magazines is the same, and most rational people would question my compulsion to buy all of them. So, after grabbing my fourth, national preview magazine in the Philadelphia airport a couple of weeks ago, I decided to prove I had too much free time provide a comparison of them to pinpoint the differences:

Team insights, comparisons and comprehensiveness are obviously the most important factors, but I also enjoy articles that address a variety of topics and people. Quite frankly, I was surprised to come to the conclusion that Athlon was the best magazine. I’d never done a side-by-side comparison, but for whatever reason I had it in my head that Sporting News was the standard bearer with good predictions, stats and features. Perhaps their being on hiatus last year is reflected with this year’s magazine.

All this having been said, the above four magazines are more for your “average,” passionate basketball fan. If you really want in-depth coverage as well as a bathroom read that will last well into 2014, you need the One ‘Zine to Rule Them All, which has a digital release available now and a printed release shipping early next month. It’s over 400 pages of sweet goodness covered in awesome sauce with write-ups like the following for ol’ KU in 2013-2014: 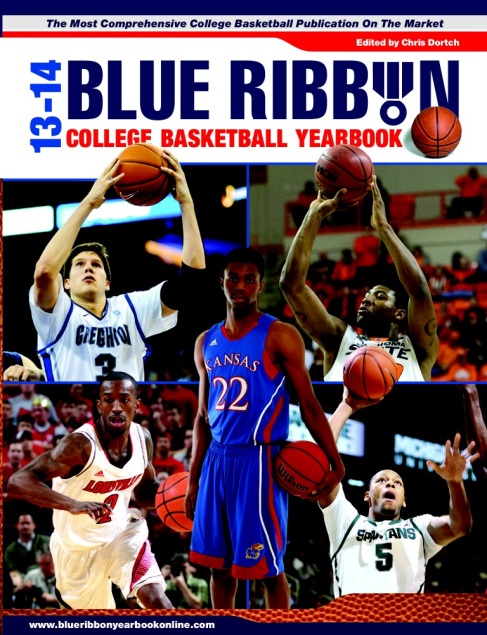 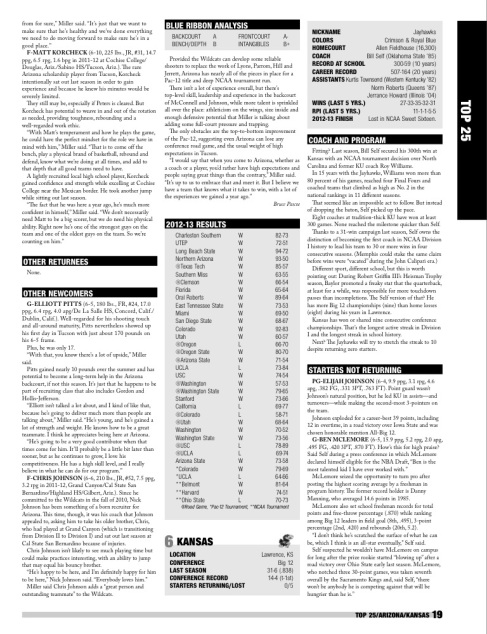 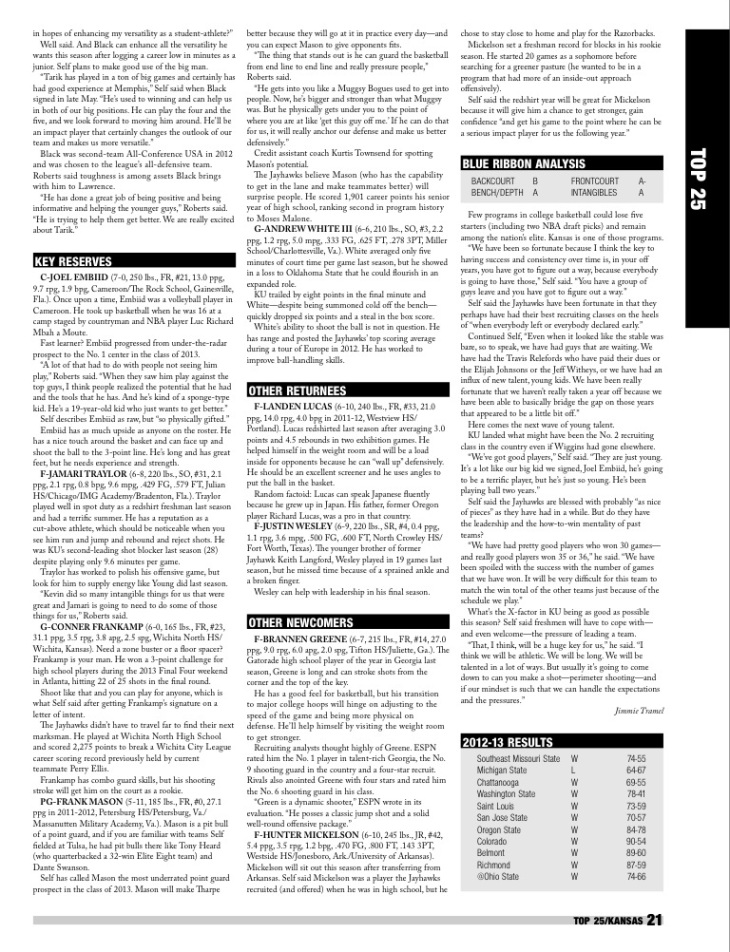 Maybe for next year, I’ll keep a hold of this year’s crop of magazines and compare their predictions to how the season actually played out. In the meantime, order your bundle special from Blue Ribbon now!