Okay, the title may be a bit of a stretch, but last week on a flight from Seattle to Burbank with my family I noticed Chuck Klosterman sitting a few rows behind me. After we landed I ended up briefly talking to him in the terminal, telling him I was a fan and that I liked his columns and books. He was very gracious and as we wrapped up, I asked him to give KU props on future Bill Simmons/Grantland podcasts (he’s mentioned KU in a positive light before). His reply?

“Of course, you guys should do well. You’ve got Wiggins.”

Like Coach Self, I’ve never seen this level of attention & hype around a player, and certainly not someone going to KU. I wasn’t anywhere close to being alive when Wilt announced to play at Kansas, but given the popularity of basketball at the time combined with how regionalized the awareness of the general public was, I have a hard time imagining it moved the needle all that much. Even though I was wrapping up middle school when Danny Manning committed to KU and moved to Lawrence (RIP, Ed), I remember (and remember being upset) that Danny wasn’t the consensus #1 recruit – I remember it being an honor shared by him, Delray Brooks and the immortal Chris Washburn.

Even with recruits that KU was in the running for, I don’t remember anywhere near this level of hype. Wayman Tisdale was the/one of the top high school players in ’82 that I remember having KU as one of his finalists (before his dad supposedly asked Ted Owens how much it would be worth for him to be a Jayhawk). Jason Kidd almost came to KU and was considered one of the best prospects in his class. Felipe Lopez used his last official visit to come to KU and was considered a “can’t miss” prodigy. None of them came close to this level of hype and expectation, though.

When LeBron was a senior in high school in 2003 he had a tremendous amount of hype (I became a believer along with Dick Vitale, Bill Walton and Jay Bilas when I saw his first, nationally televised game against Oak Hill where he had 30+ points, no-look passes, dunks galore, and generally looked like a Titan among boys), but as he was (obviously) going directly to the NBA it was different. In addition, though blogs and social media sites & apps existed at that time, it was still in its infancy in terms of reach.

What’s going on with Wiggins, though – wow. As soon as he reclassified as a senior last year he became THE #1 recruit, and because I closely follow college basketball I was well-aware of the hype around him and how he was considered to be a future star. Watching some of his highlights, it was clear he was a great athlete, but as I never once believed he would attend KU, I never dove that deep into the coverage or paid much attention to all the hosannas thrown his way. No, I instead thought Julius Randle was in the bag (and I believe he’s going to – unfortunately – be an absolute beast for Kentucky) and was prepared to be happy to have him along with the rest of the 2013 recruits as a result.

But using Chuck Klosterman’s comment as a barometer, it’s clear that the awareness of Wigginsmania isn’t just restricted to college basketball and Jayhawk junkies (though admittedly, Klosterman may pay attention to sports a wee bit more than the average person). It’s anecdotal, but I don’t remember there being so many stories about top recruits during the summer the past few years. Just looking at the past few days’ coverage at the national level:

Assuming Wiggins comes horseshoes & hand-grenades close to being as good as advertised, I obviously hope he leads KU to an undefeated season and wins the national championship. If those lowly team goals don’t happen for some reason though, my hope is that Wiggins ends up being like Kevin Durant. I’m not talking about being a possible All-Time Great, winning multiple scoring titles, emulating his style of play, or (god forbid) even playing for the Stolen Sonics, though I hope those happen (well, except for ending up in Oklahoma and playing for Beelzebub Bennett – remember, I’m in Seattle).

No, I’m talking about how I hope Wiggins is like Durant from the standpoint of appreciating and enjoying his time in college. Durant lives/trains near Austin in the off-season, wears Texas gear in a couple of his national ads – hell, he even flashed the Hook ’em Horns sign at Cole Aldrich’s wedding this past weekend while next to Coach Self and Tyrel Reed: 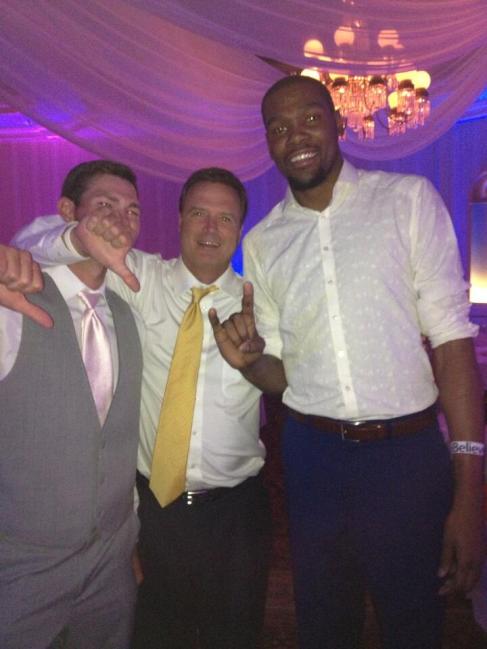 My hope is that Wiggins doesn’t feel like he’s forced to toil at Kansas for a year before going to the bright lights and big paychecks of the NBA. I hope he relishes being a part of the history and tradition, and when his time at KU has passed he continues to be an active & proud member of the Jayhawk family.

Unless we win the title, though. If that happens, he can do as he pleases and never set foot in the state of Kansas again as I’ll be comforted by always being able to point to a championship banner…