I’ve finally reached a point where I’m no longer bitter about Roy Williams leaving KU or hold it against him. I always understood the appeal of “going home,” and expected Roy to leave the first time UNC came calling in 2000. When he left the second time UNC called in 2003, it was unexpected. What added salt to the wound was how the rumors & speculation swirled before the championship game against Syracuse, and Jayhawk fans couldn’t help but think that Dean Smith and UNC contributed to the loss (though the reality was free throws, free throws, free throws). Roy Williams leaving felt like an unfulfilled promise, and a fraternal bond with UNC was broken.

Smash cut to 2013 with an NCAA championship under Bill Self’s watch to go along with nine consecutive Big 12 titles (and counting!), and I’m finally able to move on. Beating UNC in 2008’s Final Four and the past couple of years in the NCAA tournament has definitely helped too, and I admit to taking pleasure in hearing how some UNC fans expressed fear of having to play us again this last time. Although I no longer wish ill on UNC (from a basketball standpoint – not like I ever wished things like famine and pestilence), I don’t root for them to succeed, either. When they play Duke, I root for a tie ballgame.

That being said, Roy Williams is one of the few and elite coaches to have spent time in Lawrence and should be welcomed back as part of the KU family. I look forward to a time in the future where he is welcomed back in Allen Fieldhouse to receive the ovation, accolades and hosannas he genuinely deserves. In this spirit, KU BALLS is proud to help re-establish a bond with Coach Williams by pulling a couple of artifacts out of mothball shame to share with the world.

The 100 Years of Kansas Basketball poster is signed by Williams (Naismith was unavailable), as is the limited edition birdhouse in the shape of Allen Fieldhouse. In hindsight, this birdhouse may have been a harbinger of things to come for former KU AD Al Bohl – or given inspiration to his metaphor – and KU BALLS is tirelessly pursuing Bohl’s signature on a crushed dove (a stuffed one or a picture, not a real one – come on!) to display alongside Williams’ birdhouse. 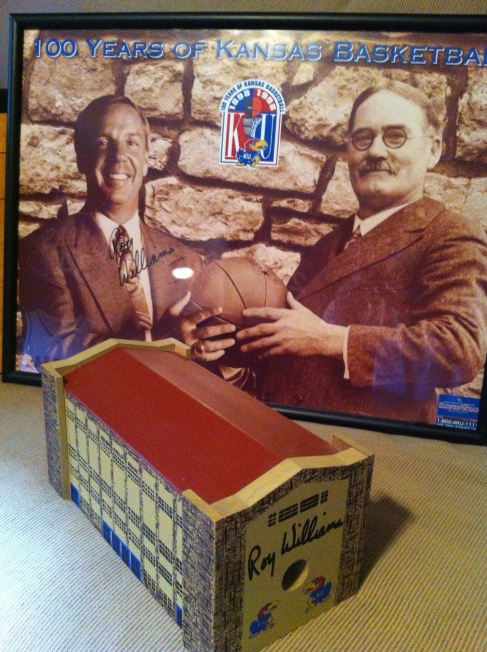